With the experience of over five years working with university and school students through the legacy SastoSat program, the newly formed non-profit organization Antarikchya [Pratisthan Nepal], in support of NATCOM-UNESCO and National Innovation Center led by Dr. Mahabir Pun, has developed an educational satellite kit called SastoCube. The non-flight satellite is designed according to a 1U CubeSat standard and is targeted for students above grade 7.

As a field-test of the product, Antarikchya sent team members and volunteers from Kathford and Kathmandu University Robotics Club to conduct a week-long program on first week of July, 2021 at a school run by Madan-Subhadra Foundation in remote Khotang. Three other government schools participated and about fifty students worked with the team to learn about electronics, mechanical systems and communication through the satellite kit.

The kit incorporates simple experiments such as lighting up RGB led by sending commands to receiving GPS telemetry data and tracing the movements of the satellite. The kit uses both block based programming for younger students and C programming for advanced users. The ground station software can be installed onto a laptop and with SastoCube's GUI software can send commands and receive data wirelessly. The incorporated manual, how-to videos and online courses will allow DIY enthusiasts, parents, teachers, students and anyone remotely interested to play, build, test and learn independently. Planned expansion kits to the base kit will have built-in cameras and attitude control systems.

Satellites, in the most basic form, teaches students programming, printed circuit board designs, soldering, wireless data transmission, computer-based modelling and most importantly, engineering problem-solving skills that can translate into an army of grassroot level problem-solvers in the society. SastoCube offers simple, interactive and guided skill development from a very young age to gain confidence in mechatronical systems so that they can then go on and work in any field they choose to in the future. 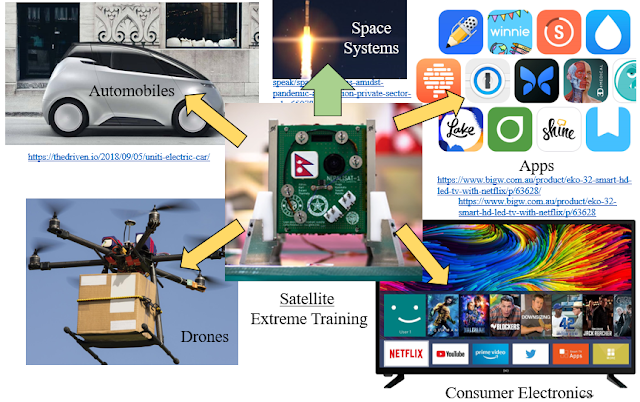 The "extremeness" of satellite-based education can fundamentally change a country like Nepal from being a technology-dependent country to a high-level technology designing hub in just a generation. The principal argument is that if such satellite kits have the potential to make such impact in Nepal, it can have anywhere else.
Labels: Antarikchya CanSat Education Made-in-Nepal National Innovation Center Product SastoCube SastoSat Satellite Satellite Education